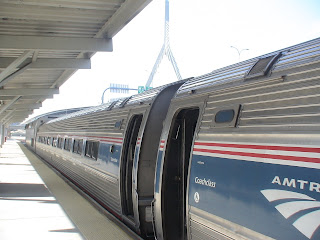 There's a discussion going on in an online a group that I participate in, Carfreeliving. It's about the efficiency of train travel, and it's bringing out the true train fanatics in us. It started when one guy linked this story about Amtrak and its efficiency compared to travel by plane:

The conclusion of this article was that with driving and flying down due to high fuel prices, Amtrak ridership is up, making Amtrak nearly 18 percent more fuel efficient than flying. That was disappointingly low to the person who posted the story, so someone else came on and excerpted a British study on rail travel that arrived at the following conclusions:

* Electrified trains performed better than diesel trains (Amtrak, except in the Northeast Corridor, runs diesel trains, and North American trains are almost twice the weight of their European counterparts)
* electric trains generally performed better than buses
* Buses and trains performed significantly better than private cars or airlines
* The Eurostar (a high speed train) consumed more energy than conventional intercity trains; however the Shinkansen (a Japanese high speed train) was more energy efficient than British intercity trains, despite its much higher speeds.
* The number of passengers on board makes a huge difference in efficiency; however, buses and trains with 20-40% of seats occupied still far outperformed airlines with 70% of seats occupied in grams of CO2 per passenger kilometre.

The study is in PDF format and you can see it here:
http://www.rssb.co.uk/pdf/reports/research/T618_traction-energy-metrics_final.pdf

The fellow who posted this item went on to talk about the precision needed in the tension of the wires for electric trains, and welding and curvature of train tracks and the relationship between those factors and energy efficiency.

We're all trying to figure out how to live lightly on the planet and reduce our carbon footprint. At least the people participating in the online discussion and I are. Eventually, even most trains will probably become obsolete as we are forced to reduce the amount that we travel all together.

That's the Big Dig bridge behind the "Downeaster" Amtrak train in the photograph. But more on the Big Dig and the rest of my train trip later.