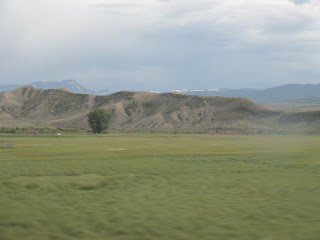 During the train ride, my attention wandered between the views outside and Jane Mayer's book, The Dark Side. Prior to reading this book, I could only make generalizations about how the Bush administration came to accept torture as a legitimate means for gathering intelligence, generalizations such as the following: George W. Bush is an intellectual lightweight and a scion of privilege who believes the laws do not apply to him, and Dick Cheney is dangerously paranoid. Jane Mayer's book provides details that explain how these two men, and others, came to embrace torture.

In the chaos of the days following the attacks on September 11, 2001, members of the Bush administration scrambled to come up with a plan, according to Mayer. The plan they eventually settled on involved attacking Afghanistan to uproot the Taliban and capture or kill members of Al Qaeda. Captured suspected Al Qaeda members would be transported to Guantanamo Bay, Cuba and designated "enemy combatants." Detention at Guantanamo and designation as enemy combatants would hopefully put the detainees beyond the legal jurisdiction of American courts and international law -- to which the United States is a signatory -- regulating prisoners of war. Members of the Bush administration thus thought they were free to create their own laws regulating the detainees. Over the course of the following months, the Bush administration abandoned the Geneva Conventions regulating treatment of prisoners of war in war time, and produced two memos that redefined torture and essentially gave license to agents at Guantanamo and elsewhere to ... well ... work through "the dark side," as Dick Cheney put it, in order to extract intelligence from detainees.