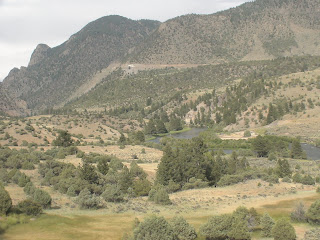 Ok, there were more than two memos, but here I'm just talking about two, and in this particular entry, only one, the August 1, 2002 one penned by John Yoo and signed by Jay Bybee. Remember, John Yoo was the deputy chief of the Department of Justice's Office of Legal Counsel. Jay Bybee was the Assistant Attorney General, serving under then Attorney General John Ashcroft.
John Yoo was primarily responsible for writing the August 1, 2002 memo that said what you did to another human being to extract intelligence was not torture if you were not intending "to inflict suffering 'equivalent in intensity to the pain accompanying serious physical injury, such as organ failure, impairment of bodily function, or even death.'" Huh?
Of course, someone who is depriving you (in this case, imagine you are Guantanamo Bay Detainee 063, Mohammed Al-Qahtani) of sleep for weeks on end, and then dumping water on your head and forcing you to stand in order to keep you awake -- and giving you enemas and in other ways humiliating you -- does not want to be accused of committing torture in violation of long-standing international law, such as the 1984 Convention Against Torture and Other Cruel, Inhuman, or Degrading Treatment or Punishment (the CAT). The CAT, to which the United States is a signatory, categorically outlaws torture no matter the circumstances (war, rebellion, or public emergencies are examples).
The narrative is that Alberto Gonzales, then the White House Counsel, sought an opinion from the Office of Legal Counsel at the Justice Department because there were questions about how to treat the growing number of detainees at Guantanamo Bay (remember, the White House had already ditched the Geneva Conventions) -- and thus the infamous August 1, 2002 Justice Department Torture Memo.
But how much conspiring happened beforehand? Mayer writes in her book that "Yoo was a charter member of a self-selected, secretive, five-man club that called itself 'The War Council.'" Also in the 'club,' she writes, were David Addington, legal counsel to Vice President Dick Cheney; Alberto Gonzales; Tim Flanigan, another lawyer in the White House Counsel's office; and Jim Haynes, general counsel to the Pentagon (and a David Addington protege). In the moments, days, weeks, and months after the attacks on September 11, 2001, these guys were busy, very busy, coming up with creative interpretations of all kinds of laws that were on the books. ...
Isn't this a pretty photograph of some place in Colorado?