Montana Governor Schweitzer Speaks at the DNC Against Petrodictators 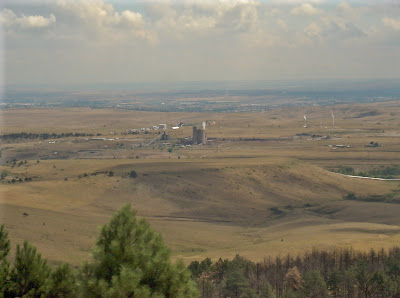 Former Rocky Flats nuclear weapons production plant, near Denver
Governor Brian Schweitzer, of Montana, might as well have screamed from the podium at the DNC in Denver yesterday: Stop driving cars!

Think about it: the human population has exploded (largely due to fossil fuel inputs into the soil) and humanity has taken over habitats that were formerly uninhabitable before we learned how utilize fossil fuels -- first coal, and then oil and natural gas -- on industrial scales. But since 1859, many geologists think we have used up about half of the world's petroleum reserves (and that includes its tar sands in Alberta and Venezuela). And besides that, we're dealing with global warming from burning all these fossil fuels on a massive scale. And contrary to what House Speaker Nancy Pelosi says, natural gas IS a fossil fuel ...

Some of my friends and family members recommend reviving nuclear power as a transitional energy source until we get our solar, wind, and hydrogen systems in place. I don't know where Gov. Schweitzer is on nuclear, but I know just about all the other Democrats are caving to the siren call of the nuclear power industry. However, to me reviving nuclear power is just another way of externalizing environmental problems onto future generations.

My proposal is daunting, but don't think we have an option: move.

That is, move close to your place of work, move into smaller houses, move into just two or three rooms of your house during the winter, move in with other people, move on bicycles and your feet, move to a farm and learn how to grow food, and so on. But move. What other realistic options do we have?

Here's a picture of the defunct Rocky Flats nuclear weapons production plant outside Denver. I took this picture from the train on the morning of August 7. And here's the link to a press release about environmental problems created by the plutonium-processing plant.