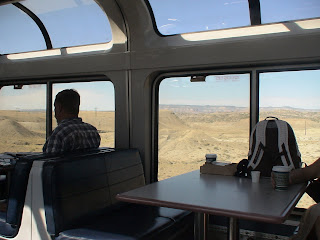 I probably took this picture in Utah, but I have gotten my photographs out of order. No matter, the man in silhouette was traveling between southern California and somewhere in Colorado. On the table in front of him was a cowboy magazine -- literally, a cowboy magazine. Across the front cover was written the name of the magazine: Cowboy.

He was not reading the magazine. Instead, he was staring out the window, looking at the scenery. He had never taken the train before, and I believe he became a thorough Amtrak convert. I can't remember the exact words he spoke, but he expressed a sentiment along these lines: "After being on this train and seeing what I have seen, who needs TV anymore?"