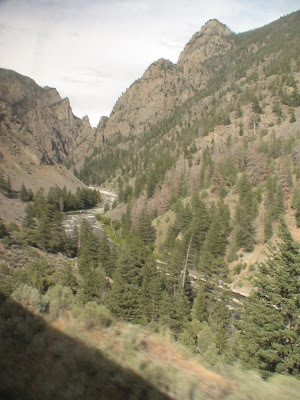 Colorado
Somewhere along the Colorado River after we had crossed the border into the state of Colorado, I saw a large black object on a grassy ledge on the other side of the river. It was at a point in our travels where the river was extremely narrow and the distance from the train to the other side of the river was maybe 200 feet, if that -- much narrower than the distance in this photograph. The black object on the other side of the river moved. I jiggled Pamela's arm and said, "Look!" It was a black bear, a very black bear, with long, sleek black fur, and a bulbous, almost yellow, nose. The glimpse lasted all of four seconds, if that, and my camera was not at the ready. I later asked a crew member of the train if she had seen the bear. She said she had been doing the California Zephyr route for 20 years and not once had she seen a bear. She missed seeing the bear on this trip also.