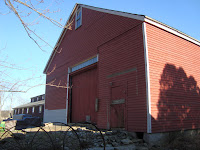 For many decades, this farm was a dairy farm. By the time the farm came into my mother's family, there may have been on average 20 dairy cows -- Holsteins, Jerseys, and Guernseys, among other types -- named after the places where they had originally been bred. Every morning, they would gather at a fence across the street and wait for my grandfather -- who had been born and raised on a farm in Maine -- to escort them into the back of the long end of the barn. Once inside each cow would dutifully take her place at her designated stall. My grandfather fed 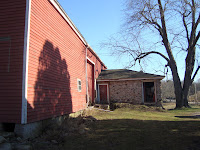 and milked the cows and then transferred the milk into large steel casks that were lowered into a cooler in the milk room. (The milk room is the small, stone addition to the right of the original red barn.) A distributor would pick up the milk and take it to a local dairy processor.

Running this farm was a very labor intensive venture for my grandfather and the rest of the family. I don't know if my grandfather ever hired helpers, but I doubt that he ever took a vacation during the nearly 20 years that it was an active farm. In the late 1960s, he sold the cows -- I remember when some of them were being herded onto a truck taken away -- and went back to his first profession, teaching.

Richard Heinberg, among others, has suggested that in response to peak oil (the end of cheap petroleum upon which our way of life now depends), that food production will hopefully go through a process of decentralization and re-localization. In his November 2008 MuseLetter, he addresses the issue of food and farming.

This farm is on typically rocky New England soil, and I don't know too much about its history prior to the arrival of my mother's family in 1950. I doubt that it was ever self-sustaining, but if current practices are any indication, the people who farmed it over the years probably brought it close to a self-sustaining operation -- with the help of neighbors.

I also do not know about its future, and whether or not it will be a center for the re-localization of food production, as these are matters that are not under my control.