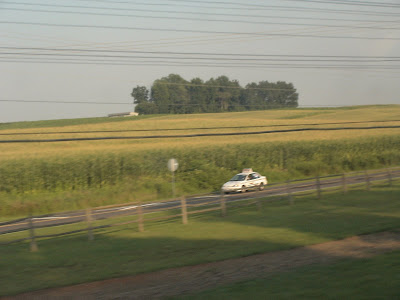 I'm burning the midnight oil right now, working on the campaign of a local candidate. We've got a set of them here in San Francisco, three or four or five individuals (if you take in the second and third rankings in our ranked-choice system) who have self-identified as "progressives" -- including the fellow whom I'm working for.

To me, progressive means believing in our collective effort to battle social and environmental degradation and lift the human spirit. It also means recognizing that there are real material limitations to our lifestyle -- and we are fast approaching some very serious ones such as limits on the energy, water, and soil resources of our planet. The implications for the collapse of an one of those resources is ominous. In my mind, anyone who self-identifies as a progressive should at least be open to learning about the disasters we could and do face as a species because of these limits. And I'm pretty sure that the candidate I am working for is.

Back to My Travels and My Thoughts
Once we left the state of West Virginia, our train began to travel parallel to the Blue Ridge Skyline. I could not see those mountains from the train, but I found the rolling fields and horse farms of Virginia beautiful nonetheless. This photograph does not capture the beauty of what I saw from the train window.

There is one author that I read, James Howard Kunstler, who writes bleakly about the future of humankind as the collapse we are now experiencing economically worsens and begins to encompass resource collapse. He suggests that rural parts of the nation -- especially the gun-loving South, including Virginia -- could descend into a Mad Max kind of violent chaos.

Another author, Richard Heinberg in his book Powerdown, suggests ways to avert chaos. He believes that if we successfully transition away from the energy and resource-intensive lives that we are now leading that the future will find more of us leading traditional agricultural lives, more like the lives led by the Amish.

It's a bucolic utopian dream that many of us have. In fact, on this trip, I was on my way to the farm, the place where my mother moved with her family when she was a teenager and that is now owned and run by one of my aunts and her husband. Though my aunt and uncle now derive great joy from their farming, it was no utopia for my mother or her sisters. You will see pictures shortly.
No comments:

Day Four, Part One -- Becoming a Nation of Torturers: the Background 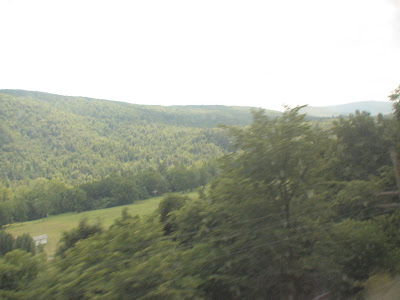 George W. Bush made his way to Washington, DC surrounded by individuals -- Dick Cheney, Donald Rumsfeld, and Cheney's lawyer David Addington, among others -- who scorned democracy and who longed to concentrate power in the executive branch. When five members of the United States Supreme court ruled to stop the Florida vote recount in 2000, they had their chance ...

Among the various laws and treaties that Bush and members of his administration immediately set out to scrap (or at the very least undermine) were the Freedom of Information Act (FOIA), the Presidential Records Act of 1978 and the Anti-Ballistic Missile (ABM) Treaty of 1972.

One month after the attacks of September 11, 2001, on October 12, Attorney General John Ashcroft issued a memo to all the federal agencies saying that if there were a ‘sound legal basis’ for resisting FOIA requests, the Department of Justice would defend those agencies. ‘Sound legal basis’ was undefined.

Then on November 1, 2001, George W. Bush signed Executive Order 13233, gutting the Presidential Records Act. This act is a post-Watergate Act that restricts public access to presidential records for 12 years after a president leaves office. For twelve years after leaving office, presidents have exclusive access to their papers. They can use them to write and sell their memoirs (and use the proceeds to pay of legal fees as in the cases of Richard Nixon and Bill Clinton). At the end of twelve years, however, those papers — which were generated with public funds by public servants – were to belong to the public.

But Vice President Dick Cheney and former Secretary of Defense Donald Rumsfeld had been aides to Gerald Ford when Congress passed the Presidential Records bill. At that time they urged Ford not to sign it, but he did. Now, both were back in Washington, DC, in the administration of George W. Bush. In addition, the 12-year limit on the records of President Ronald Reagan – and Vice President George H.W. Bush – was almost up. The papers of Reagan and Vice President Bush, including any documents relating to the Iran-Contra scandal, would soon be in the public realm.

Then the attacks of September 11, 2001 happened. A once widely- scorned president became a hero, and the balance of power shifted to Cheney, Rumsfeld, Addington and others who were determined to undermine the legislature and concentrate power within the executive branch.

Executive Order 13233, according to Bill Moyers and guests on the April 5, 2002 episode of the show Now with Bill Moyers, suddenly placed new obstacles in front of historians, journalists, and others seeking access to the archives of the Reagan administration. The new executive order says that anyone who wants access to the records of former presidents – and vice presidents – has to hire a lawyer and go to court to get access to those records. The former presidents, vice presidents, their family members and their children, on the other hand, will be defended for free by Department of Justice lawyers.

Once Bush, Cheney, and others had effectively weakened the FOIA and the Presidential Records Act, they turned to the 1972 Anti-Ballistic Missile Treaty. This treaty bound the United States and the former Soviet Union to an agreement in which neither side would attempt to build defenses against incoming nuclear missiles (except in limited ways around centers of government), based on the concept that mutually assured destruction in systems without defenses – and the fact that neither side could actually conduct a true test of such a system due to the risks of failure – ensured mutual deterrence. But now it was time to scrap this delicate agreement. In December 2001, Bush abided by the language of the treaty calling for a six month notice to the other party and told Russia the United States would cancel the ABM Treaty – and June 2002 he did so.

While this did not actually happen until after September 11, 2001, the plans were in the works to do this beforehand. Remember how Ronald Reagan wanted to build a protective shield that became known as “Star Wars” – or Strategic Defense Initiative?

Next: the Geneva Conventions, the Conventions on Torture, and the U.S. Torture Statute …

My train trip is now two months behind me, and it's campaign season. Sarah Palin has given many of us a good laugh, but I am scared. She appeals to too many people, and I don't trust them to use reason as opposed to emotions when they go to the polls. Watch this YouTube video.
No comments: