Day Four, Part One -- Shame on this nation. 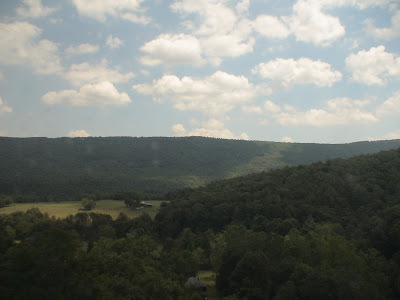 That's what Rudy Giuliani chanted at the Republican National Convention in St. Paul.

Here's the link to the text of his speech in the Los Angeles Times: Drill, baby, drill!

Americans are not entitled to the earth's natural resources at the expense of the rest of the planet and future generations, contrary to what Republicans are telling them -- yet Obama's platform is not much better: "As president, I will tap our natural gas reserves, invest in clean coal technology, and find ways to safely harness nuclear power. I'll help our auto companies re-tool, so that the fuel-efficient cars of the future are built right here in America. ..." Here's the link to the text of his acceptance speech at the Democratic National Convention in Denver.

Clean coal? Safe nuclear? They do not exist.

Above is a photograph of the mountains of West Virginia. Here's a link to coal industry plans for these mountains: Mountain Top Removal.

I grew up in Pennsylvania, 30 minutes north of coal-mining country. One (or more?) of the Molly Maguires was supposedly hanged in what was the schoolyard of one of the places where I went to middle school. The Molly Maguires were a group of Irish miners who wanted to organize labor in 1870s, when organized labor was illegal.

By the time I was growing up the miners were unionized, but they lived a dilemma -- on the one hand, they depended on mining for work and for the energy to power their (and mine) lifestyles. On the other hand, their profession was destroying their communities -- and, we now know, the planet. Here's a link to some photographs of a former mining town in my county, Centralia, Pennsylvania. It's now a ghost town due to mine fires that still burn.
No comments: 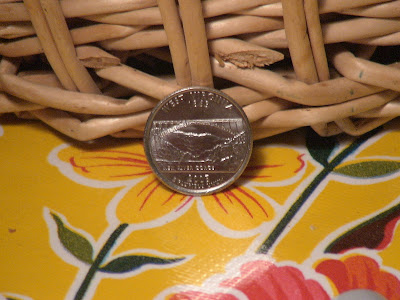 Our Trailways bus arrived in Indianapolis at about midnight. We disembarked and walked through the train station, past a concession stand, and up some stairs to the train whose departure we had missed in Chicago. Friendly conductors hustled us onto the train, families with children and individuals with special needs first. When I finally got on, there were not so many seats left. There was an empty one beside a well-dressed teenage boy, but in the seats directly in front of him were an older woman next to another teenage boy who was dressed in Goth black and chains. I had seen both of these people on the other train – and knew they were not traveling together.

Being as old as I am, I pulled ranked on the Goth. I leaned over him and suggested firmly that he sit in the seat in back and that I sit where he had been sitting, next to the older woman. He said, “Ok,” and got right up as if he knew better than to resist.

For me, it turns out that was a good move. I never caught this woman’s name, but when we both awoke the next morning, in the hills of West Virginia and alongside the New River, I found out that she had been living and working in Hawaii doing social work with foster children for many years. Recently, she had retired, and she and her daughter had returned together to her family’s native Nebraska to care for her elderly father. She was a quilter and told me that she and her social worker co-workers in Hawaii had given a quilt to every child in their care. She had also recently been involved in the Hillary Clinton campaign, but had resigned herself to the Democratic Party nomination of Barack Obama for president. He would win, she thought, if they didn’t kill him first, as they had Mel Carnahan and Paul Wellstone ...

The train in West Virginia traveled through the Appalachian Mountains, alongside the New River, through Charleston, Montgomery, Prince, and a number of other small, anonymous towns. The mountains – long and verdant – were similar to the ones in which I had grown up in Pennsylvania. But the New River valley through which we traveled was narrower and deeper than anything from the part of Pennsylvania that I come from. In fact, there was some kind of tour guide or train buff then aboard making announcements and pointing out sights of interest.

We were in coal mining country, and at one point we passed the West Virginia University Institute of Technology. Not long after that, the guide told us to look outside and up quickly – so that we could get a view of the New River Gorge Bridge. Again, it passed by us so quickly that I did not have time to take a picture. But it’s the same bridge as the one pictured on the quarter for the state of West Virginia.
No comments: 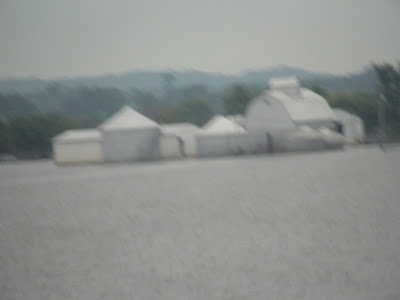 We traveled through Nebraska and on to Burlington, Iowa. When we finally crossed the Mississippi River, we were nearly four hours late.

By this time, I was tired and feeling pretty grungy. I was also concerned about missing my connection in Chicago -- I was booked to get on a train bound for Washington, DC, and then to change to a train for Boston in Washington, DC.

An announcement came over the intercom that people booked on the Cardinal & Hoosier State rail line were to get off the California Zephyr (bound for Chicago) in Galesburg, Illinois, and get onto a Trailways bus bound for Indianapolis. I checked my itinerary and realized that that I had a reservation for this line. At this point I also realized that way back when when I had originally booked my reservations that the booking agent had routed me on a route I had never taken before -- a southern route through Cincinnati, northern Kentucky, southern West Virginia, and western Virginia. Then in Charlottesville, Virginia I would hook up with some other train and continue on to Washington, DC. This all to get to Boston, Massachusetts.

Suddenly, my travel excitement returned. I had never been to Kentucky before, and I would be traveling through the mountains of southern West Virginia, where I had never been, and then parallel to the Blue Ridge Skyline in the state of Virginia proper. I was not disappointed.

Rain storms had whipped through the midwest in early summer, and the water levels were still extremely high when our train crossed the Mississippi and traveled into Illinois. In fact, on the return trip, I saw a whole village virtually submerged in water, only the roofs visible. I remember this same region was hit in 1993 by devastating floods.

Perhaps yes, perhaps no. But if we don't know, why are we taking chances?
No comments: