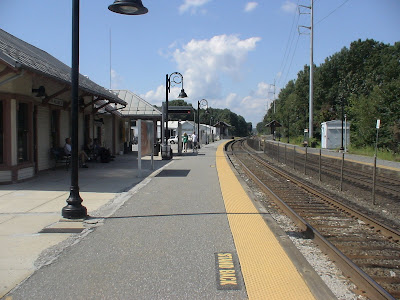 From North Station in Boston, I took the Lowell train. Usually, I don't go all the way to Lowell, instead disembarking at an earlier stop where my sister picks me up.

It's usually an uneventful train ride through mostly working class towns outside of Boston and through wetlands areas with ponds overlaid with water lilies -- and those are scenes that you have to imagine because I did not take pictures.

This station in the picture -- and others like it that ring Boston -- is a commuter station. People come in the morning and park their cars, pay a parking fee, and take the train to Boston's North Station to get to their jobs. This particular station is also Grand Auto Theft Central, as my sister discovered many years ago when she and her husband first moved not too far away, and someone heisted her little, used Toyota that she had bought just for the commute from their house to the station. When she filed her police report, she found out that there is a lot of auto theft at this station.

Boston has an old and well-built up system of commuter lines to outlying communities. There is a debate in the San Francisco Bay Area about whether or not to extend BART (Bay Area Rapid Transit) to outlying suburbs so that people can forego their personal cars in order to get to work. I think the planners with these ideas are thinking about reducing congestion on the roads leading to jobs, but others of us are thinking about the environment and social justice issues.

Because here's the thing: while it's true that many people have been forced out of San Francisco and other dense communities by the high cost of housing, the people who live in the communities that BART is being extended to tend to be middle class. BART, a rail system, is very expensive to operate, especially compared to buses. People who live in the denser communities such as San Francisco and Oakland argue that BART should not be extended to the suburbs because that will induce sprawl and because BART is so expensive to build and operate. They say that instead, BART should rely on shuttles to get people in the suburbs to BART connections and that the region as a whole should concentrate on constructing affordable infill housing in parts of the region that are already transit rich. Doing anything less, they argue, is a subsidy for the middle and upper classes at the expense of providing better public transportation for poorer people.

But the conventional wisdom is that middle class people in the suburbs have some kind of aversion to buses. So we're back to extending BART. At the very least, parking at the BART commuter lots should not be free. Parking should NEVER be free, in fact, according to Donald Shoup, UCLA professor of Urban Planning.

Back to commuter rail in the Boston area: I depend on it for my travels and am very happy that it exists. I just wished that my family members lived closer to the stations than they do.