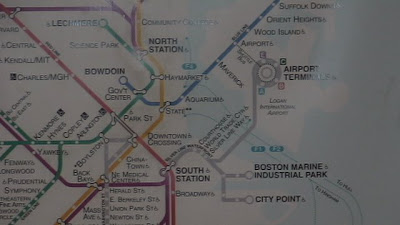 Getting Around in Boston

At 10 pm on the night of July 25, I boarded a train from Washington, DC to Boston. The train was filled to capacity when we left, but by the time we arrived in New York City, I was able to stretch out on two seats and sleep. We arrived at Boston's South Station at about 7 am the next morning. From there, I needed to get to my sister's house near the Massachusetts border with New Hampshire. For people like me, who do not own cars and who resist the expense of cabs, getting to her home can be an ordeal.

But the trouble starts even before I leave Boston proper. Amtrak travelers coming from the west and south, as I did this past summer, arrive at Boston's South Station (or Back Bay, but I never get off there), and air travelers arrive at Logan Airport. Once I get to South Station or Logan Airport, I need to get to Boston's North Station in order to get out to my sister's town (or the towns where other people in my family live). And you can tell by looking at this map that Boston's major transit hubs -- South Station, North Station, and the airport -- are not conveniently connected to each other for users of mass transit.

And none of that is easy.

Invariably with several pieces of luggage in hand, I negotiate the turnstiles and stairs to the Red Line, the second set of stairs up and then down at Park Station where I always transfer to the Green Line, and the elevators and ground-level walkway to North Station.

But if you are a car traveler, why you have the Big Dig. ... See next entry.