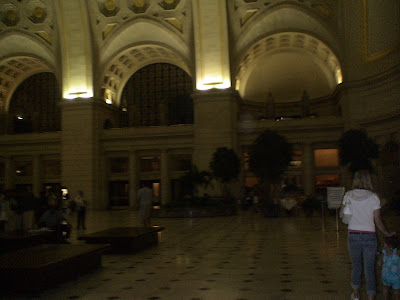 Union Station, Washington, DC
What will happen now?
I was eager to contemplate the Bush administration transgressions against democracy when the train got to Washington, DC -- the efforts to repeal the Posse Comitatus Act of 1878 which restricts the use of the military in domestic law enforcement, the creation of the Northern Command -- a new center for military operations in North America -- and the deployment of the 3rd Infantry, 1st Brigade Combat unit from Iraq to the United States to fulfill the military requirement at USNORTHCOM. Sounds like someone is getting ready for martial law to me.

Amy Goodman, on Democracy Now!, pointed out in her October 7, 2008 show that the brigade that had been stationed in North America had just "spent three of the last five years in Iraq in counterinsurgency." "It’s a war-fighting unit, [and] was one of the first units to Baghdad," she added. In fact, it took part in the battle of Fallujah. "That’s what they’ve been trained to do. And now they’re bringing that training here?" she asked rhetorically.

The Posse Comitatus Act remains intact on paper, but the Bush administration has been quite successful at undermining so much of the rule of law and the US Constitution that it must have felt it could easily blur the line between civilian and military law enforcement if it ever felt the need to. Remember, at the behest of the administration, the telecommunications giants engaged in illegal monitoring of people's electronic communications, and even the New York Times did not have the courage to expose the collusion between the telecoms and the administration -- at least not until after the 2004 election. And then instead of beginning impeachment proceedings against members of the administration who ordered the spying, Congress acquiesced and passed the FISA Amendments of 2008, giving the telecommunications industry immunity from civil suits for its illegal spying.

And how did the telecommunications giants thank Congress? By footing the bill for a good part of the Democratic National Convention in Denver this past summer.

Ok, so we're getting a new president, Barack Hussein Obama, who ran on a vague platform of "change" and "hope." But Obama himself voted for the FISA Amendments ...