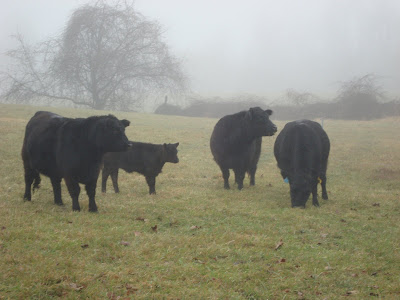 Cows in the mist, November 2008
Country Chickens
As part of my grandmother’s effort to live closer to the land, she got hens and roosters, began raising chickens, and started collecting their eggs and selling them to customers who wanted truly farm fresh eggs. This was at least a decade before the term “free range” became popular. Knowing full well that eggs have probably been the single most easily collected condensed source of nutrition since the dawn of humanity and our hunter/gathe 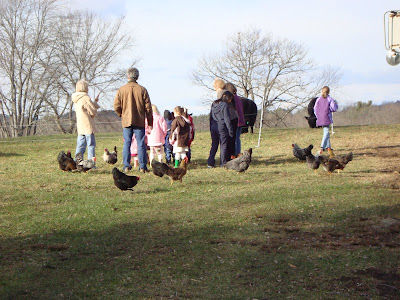 rer days, she also ate an egg every day, insisting that their nutritional value trumped any concerns others might have about cholesterol.

My aunt has carried on that practice, though I don’t think she has any roosters, which can be loud and vicious. The last time I visited her, she served me some eggs one morning for breakfast. Even though I have been going to the farm and consuming eggs there for years, for the first time I noticed the brilliance of the orange yolks. My aunt said that color was from the carotene in the grass and other plants that her free-range chickens are able to forage. To the left, chickens gather at the feet of members of my extended family on Thanksgiving day, 2008.

My aunt and her husband are also raising grass fed beef cattle. They now have four full-grown miniature Black Anguses and one Black Angus calf – with more on the way. My aunt studied carefully before she chose 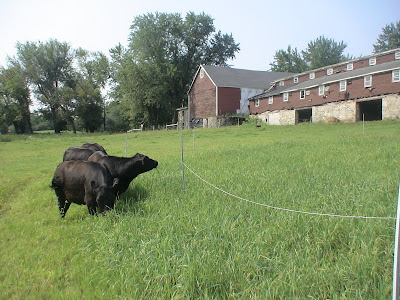 these cows (officially hers are Wyndham cows – a variation of the Black Angus), known because of the quality of their meat, their small size, and their gentle dispositions. The cattle spend nights in the basement of the barn, and then graze a section of the pasture by day. My aunt carefully cordons off different sections using an electric wire so that no part of the field is over grazed.

The cows above had been eying me warily from within the barn and would not initially come out. But the second they saw my aunt pick up a stake and move the electric wire, they emerged from the basement at a trot, eager to go at the fresh grass. (July 2008)

On Thanksgiving day 2008, my cousin's daughter and my nephew enjoy the chicken coup and fresh eggs. Below, my aunt emerges from the fenced off area that encloses the chicken coup, a place safe from coyotes, raccoons, and other predators, in July 2008. 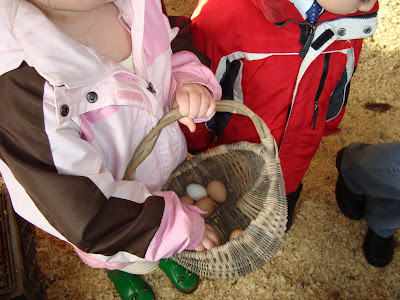 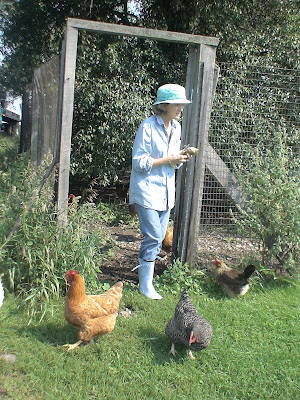