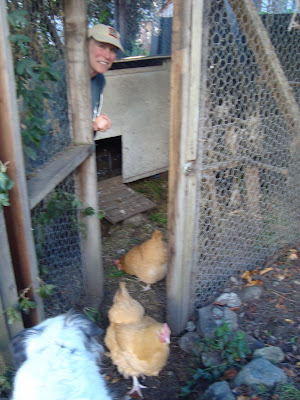 This is Joni holding an egg. She and I have recently gotten to know each other through our volunteer activities -- we've been tabling across from each other at different events for a couple of years now. She is originally from Upstate New York, but she and her husband have been living in their house in the Potrero Hill neighborhood of San Francisco for 35 years now. For 30 of those years, she has been keeping chickens for their eggs. She now has four chickens. She gets her chickens and organic chicken feed from a place in Half Moon Bay. I guess she drives to Half Moon Bay -- but otherwise she rides her bicycle all over the city. In this photograph, you can see the enclosure that she and her husband have created for their chickens. 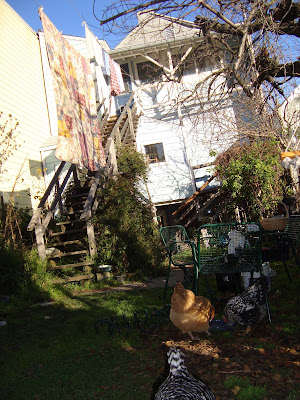 Long before it was fashionable, Joni and her husband installed solar panels on the roof of their house. They also practice solar drying -- hanging their laundry on a clothesline to dry instead of using a dryer. 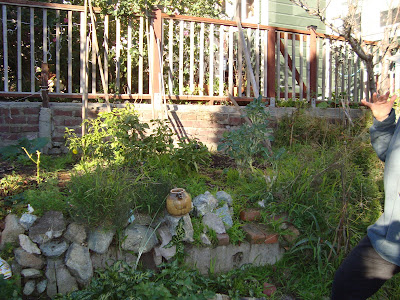 Much of San Francisco is considered too cold and foggy for hot weather plants such as tomatoes, peppers, and corn. But they grow all three of those food plants in their backyard garden on the sunny east side of San Francisco. Their chickens have the run of the garden, and, just like my aunt's chickens, they produce eggs with brilliant orange yolks. 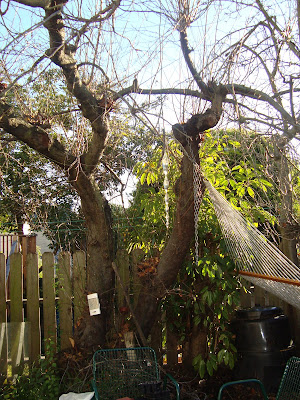 When Joni and her husband first moved in, there was nothing in their yard, but their neighbor had two baby plum trees, and they transplanted them to their own yard. The trees are now full-grown and producing fruit, and they have strung up a hammock between them. From other plants, they also harvest Gravenstein and Golden Delicious apples, Meyer lemons, pineapple guavas, and labor intensive gingko nuts. 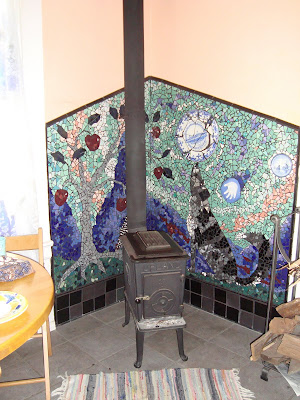 The plum trees also provide something else -- wood for their wood burning stove in their kitchen. Out of concern for the dangers of releasing particulates into the air, they only burn wood when it is raining. The mosaic in back of the stove is by Joni.

I want this life.