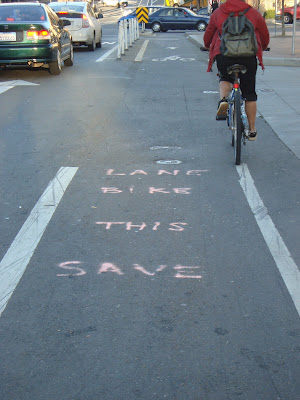 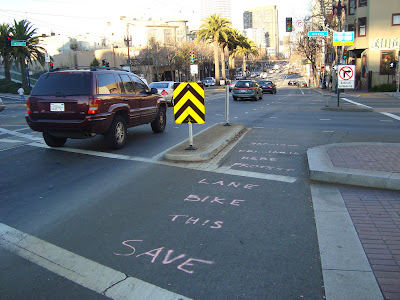 San Francisco sustainable living activists rallied around one local ballot measure and against another local ballot measure in the fall of 2007. We were for Proposition A (top) and against Proposition H (second from top). Both were transportation and land-use related measures. Proposition A has some good elements for city residents and some that were perhaps not so good upon reflection. But it was also a charter amendment, and it had a clause in it that, if the measure passed, would trump Prop. H if Prop. H passed.

For anyone concerned about the financial livability of the city -- and the environmental health of the planet -- Prop. H was an over-the-top bad idea. Prop. H was promoted by Gap founder Donald Fisher (who doesn't even live in SF) and Webcor, a construction company. They wanted to remove restrictions on building garages for two reasons: 1) because residential buildings with garage spaces, in this already inflated city, rent or sell for more; and 2) because they thought commercial garages would increase the profit margins of the big chain stores and hoteliers in downtown San Francisco. But had H passed, congestion and housing costs would have increased. It didn't pass.

But A passed, and because it passed, the role of our elected members of the Board of Supervisors in a lot of transportation-related matters was minimized or eliminated. Traffic engineering and transit-related decisions are now primarily in the hands of professionals at the agency and Municipal Transportation Agency (MTA) commissioners, who are not elected. In some ways, that's good -- after all, we do not want politicians dictating to scientists about the impact of greenhouse gases on the climate or how to prevent the spread of HIV.

But in this case, it's not so clear that removing the role of our elected officials is such a good idea: the San Francisco intersection of our major thoroughfare, Market Street, with on and off ramps to one of our few freeways, the Central Freeway at Octavia Street, is a nightmare for pedestrians and especially bicyclists. There is a dedicated eastbound bicycle lane on Market Street at this intersection, and it is illegal for people driving east on Market Street to turn right onto the freeway on ramp out of concern for bicyclists and pedestrians.

Nonetheless, there have been a number of collisions between eastbound bicyclists and eastbound vehicles whose drivers are making illegal right hand turns onto the freeway. In response, prior to the passage of Prop. A when our elected local representatives still had to approve every MTA traffic design decision, the MTA put up physical barriers, including a concrete island, to prevent drivers from making illegal right hand turns.

Because collisions still happen -- though at a lower rate -- the MTA is now considering removing the bicycle lane and the physical barriers, and forcing bicyclists to merge with car traffic on Market Street. Needless to say, bicyclists, including me, are not happy about this. But what recourse do we have?

The San Francisco Bicycle Coalition is organizing a rally at the intersection from 7:30 a.m. to 10 a.m. on the morning of Friday, January 16, and is also urging people to contact Mayor Gavin Newsom at gavin.newsom@sfgov.org, City Attorney Dennis Herrera at cityattorney@sfgov.org, and Nat Ford at Nathaniel.Ford@sfmta.com.