Parking in the Red Zone 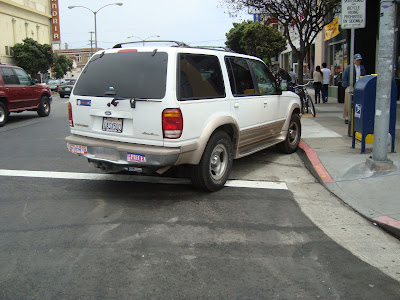 People frequently pull into the red zone on Geary Boulevard at 19th Avenue, park, and run into the Starbucks/Wells Fargo to get a Mocha Grande (or whatever those things are) and/or complete a bank transaction. 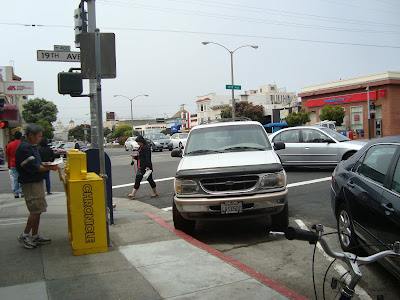 But parking in red zones at the intersection of streets is illegal -- and with good reason. Cars backing out of this particular red zone back right into oncoming north bound cars on 19th Avenue that are making right turns onto Geary and into the path of crossing pedestrians. 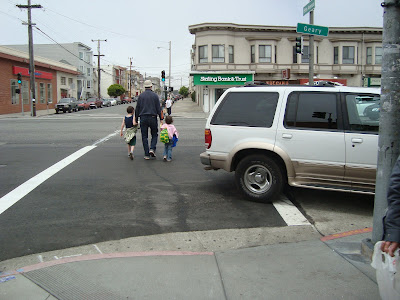 The woman who had parked this SUV in this red zone was none too happy when she noticed me taking pictures. I explained to her the dangers posed to pedestrians by cars parked in red zones at intersections and expressed my desire for a bulb out at this particular intersection. She, in turn, groused about the insufficient parking in the neighborhood. I told her I hoped that people would start walking or riding their bicycles more. She said she biked when she could but that she ferried around five people -- the oldest of whom was 82 and the youngest of whom was five.

And she's got a point except for two matters: one, in this particular instance she was the only passenger of her vehicle; and, two, what are she and people like her going to do when our way of life, dependent as it now is on vehicles to ferry us around, is no longer financially or environmentally sustainable?

Oh yeah, I forgot, cars will be the affordable housing of the future ...

=v= The red zone should be a curb bulbout, thereby giving pedestrians a shorter journey across the street and making it impossible to stop there.