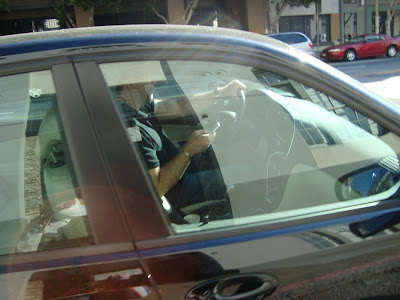 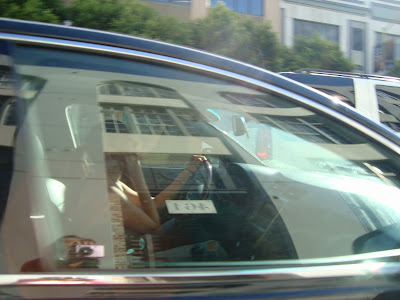 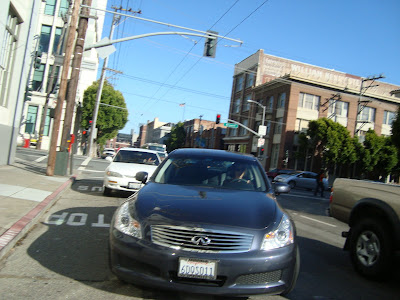 Queuing up to cross the Bay Bridge? (Notice bus creeping up in back.) 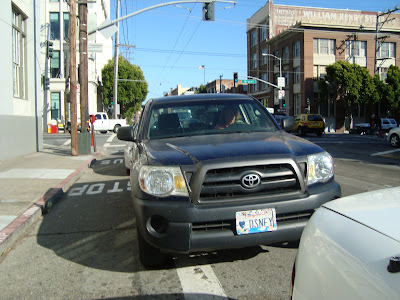 This woman harangued me for taking pictures of the cars in the bus stop. Imagine that! 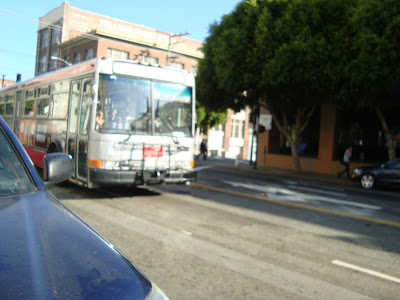 One thing bus stops certainly are NOT for is buses pulling up to the curb to pick up passengers.

I'm taking a free painting course at the Academy of Art on Federal Street in San Francisco on Tuesday afternoons. I take the T-line from my work to the ball park and then walk up Second Street to the class. And I invariably leave early (because of my work schedule) which gets me out at the so-called 'bus stop' -- at the intersection of Second and Bryant streets in the city's District 6 -- during rush hour. There were two of us waiting the first time I went out, and both of us had to inch through on-coming traffic to get to the Number 10 Townsend Bus to go to the Transbay Terminal and make our connections.

The second time I had to do this, I figured I could walk. But I didn't. Instead I got my camera out and took pictures of cars lining up in the bus stop -- and then stepped right into the bus stop and took more. (Someone called out to me from his car, "Everyone does this.")

The bus driver, who saw me clicking away as I made my way into on-coming traffic to clamber onto his bus, chewed me out when I got on the bus, but later I told him I intended to say something to the District Six supervisor, and the bus driver and I had a quite nice conversation.

And I will say something (though Proposition A, which got passed by the voters in 2007, takes district supervisors out of the loop when it comes to traffic, transit, and parking decisions) because there is a potential lawsuit against the city in the mess at this particular bus stop. And if there is no potential lawsuit against the city at this bus stop, there is certainly something else: a gold mine for the cash-strapped SF MTA.

and the current design for the Second Street bicycle lane on this block is: (drum roll): "Sharrows"! Obviously when the going gets tough the best strategy is NADA.