Throwing Shoes Is Not Enough 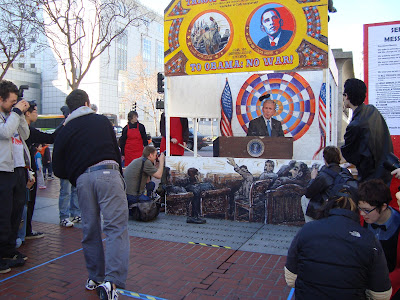 A small "d" democrat throws a shoe at a likeness of George W. Bush, getting everything out of his system, on January 20, 2009, at UN Plaza in San Francisco just after the inauguration.
On June 22, 2004, a few weeks after the Abu Ghraib scandal had broken, then White House Counsel Alberto Gonzales, then General Counsel to the Secretary of Defense Jim Haynes, and then Deputy General Counsel Dan Dell’Orto, held a press conference. Unbeknownst to the general public, the apparent purpose of the press conference was to deflect any blame for the abuses at Abu Ghraib, Guantanamo Bay, and elsewhere from themselves and to turn underlings below them into fall men and women for what might well be violations of the law, violations as serious as war crimes.

There have been, however, many independent investigations into their arguments and no small number of books and articles that have been produced. Philippe Sands, a British lawyer, interviewed individuals who played roles on the ground in Guantanamo and in the Pentagon itself and published his findings in Torture Team: Rumsfeld’s Memo and the Betrayal of American Values, in May 2008. He draws a direct line between aggressive interrogation techniques at Guantanamo and lawyers at the highest levels of the Bush administration, even going so far as to compare the Bush lawyers to Nazi lawyers who interpreted German and international law in ways that would hopefully protect themselves and higher ups from future charges.

New Yorker staff writer Jane Mayer has written The Dark Side: The Inside Story of How the War on Terror Turned into a War on American Ideals, also published in mid-2008. Her book investigates the Abu Ghraib and extraordinary rendition scandals, as well as aggressive interrogation at Guantanamo Bay. “Seven years after Al Qaeda’s attacks on America, as the Bush administration slips into history,” she concludes on page 327, “it is clear that what began on September 11, 2001, as a battle for America’s security became, and continues to be, a battle for the country’s soul.”

Glenn Greenwald, a former Constitutional law and civil rights litigator, has written continually for Salon.com and elsewhere about the possible commission of war crimes by members of the Bush administration.

In response to these exposes, the editorial staff of the New York Times and others have gotten on board calling for some kind of accounting and restoration of respect for the rule of law.

Now, finally, Congressman John Conyers, D-Detroit, and his colleague Senator Carl Levin (D-Michigan), are both indicating an interest in investigations into the past administration and its possible abuse of powers and commission of war crimes.

This is good, but if there are investigations, I hope they are not just about specific abuses by specific individuals within the Bush administration. If there are any investigations, I hope they become sort of “Truth and Reconciliation” investigations in which the American people can engage in a close examination of their lifestyles and attitudes and the role these lifestyles and attitudes had in letting themselves be led so far astray from what should be the core values of our democracy – transparent government, fairness, and the common good.

I think we've lost site of these values -- especially the common good -- and really, that's what this blog is all about.

(But don't confuse me with those free-market "common gooders" at the Wall Street Journal who take good words and use them obfuscate their bad intentions: the concentration of wealth and power in the hands of a very small number of people.)