Hope for Change Is Dashed in San Francisco? 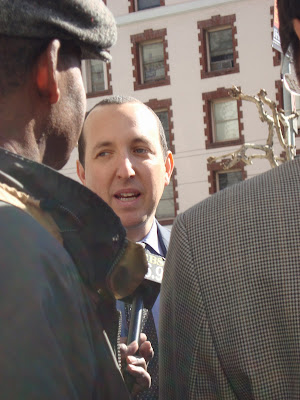 American Civil Liberties Union attorney Ben Wizner; February 9, 2009; San Francisco, California
On February 9, 2009, three judges with the US Court of Appeals for the Ninth Circuit heard a arguments in a motion to appeal the decision of a lower court. The case is Mohamed v. Jeppesen Dataplan, Inc. Mohamed is one of five suspected terrorists who were subjected to extraordinary rendition either by the US government or on behalf of the US government -- they were abducted and transported to prisons in Egypt and elsewhere where they were interrogated aggressively. (Oh, aggressive interrogation, for the purposes of this blog, is a euphemism for things that are against domestic and international law, including torture.)

Attorney Ben Wizner, above, represented the five plaintiffs in their civil case against Jeppesen, the Boeing subsidiary that they accuse of arranging the rendition flights. 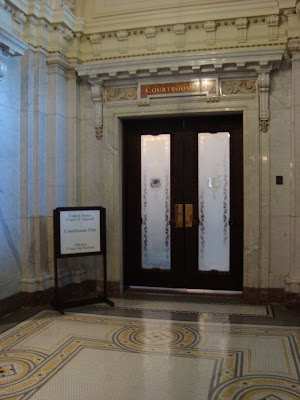 The case was a test of the Obama administration: would it break from the practice of the Bush administration, which argued that the case (in a lower US District court in February 2008) could not be litigated because of "state secrets"? Or would it perpetuate the status quo?

The case was watched carefully -- I knew about it because I heard a report on NPR the evening before, and decided I was going to set my alarm early and get up and go.

To the great disappointment of civil libertarians, the DoJ did not change tack. Letter, the DoJ lawyer, argued that the case should not be litigated because of "state secrets."

It was covered by the San Francisco Chronicle, the New York Times, and other news outlets, including one story by me that ran in Fog City Journal. My story got a response from a well-respected legal analyst in San Francisco who suggested that Obama was buying time and creating space for a new policy on terror suspects to evolve. I hope the legal analyst is right, by the way.

You can read these stories and more here:

Unfortunately, on the night of February 12, 2009, the Obama administration went back into court in San Francisco to argue for the protection of "state secrets" again. I missed that case.

Here is commentary from AlterNet, Salon.com, and Mother Jones on what Obama could be up to and how there might eventually be some kind of accounting for members of the Bush administration who may have violated the law. And following is a story in from the February 10, 2009 San Francisco Chronicle about efforts by Senator Patrick Leahy (D-Vermont) to launch a truth commission into possible misdeeds by the previous administration: Sen. Leahy proposes truth panel on Bush policies.