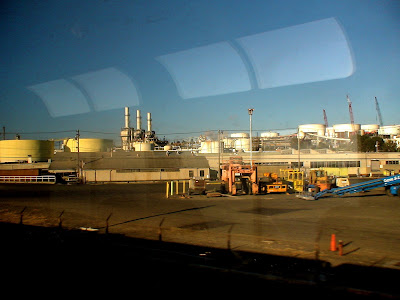 The refinery in Richmond, California; taken from the Amtrak train on August 8, 2008
There is a group of people in San Francisco who are preparing the city's official Peak Oil Preparedness Report. The report is now in its draft form and available for public comment. In the introduction, there is one paragraph that references a study by the Federal Reserve Bank of Philadelphia. The San Francisco report extrapolates from that report as follows:

The leading edge of peak oil will be its economic impact. When the Federal Reserve Bank of Philadelphia did a comprehensive study of the effect of oil price changes on the economy, it found a profoundly negative relationship. According to its report, the 2008 doubling of oil prices will reduce 2009 US economic output by 11% from what it otherwise would have been. It doesn’t even matter that the price spike was temporary; the damage to the economy will be long-lasting.

The reasons for the current economic collapse are complex, but the commentaries that I have read so far emphasize the absence of adequate regulation of the financial and housing sectors. It's hard to imagine, however, that the rise in the price of a barrel of oil last year has not played into the current economic havoc as well.