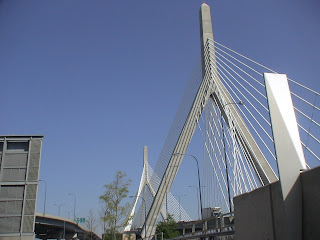 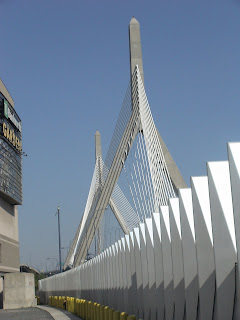 Once I got from South Station to North Station, I had an hour or so to spare before my next train to my sister's town near the New Hampshire border. Tired and grimy as I was, I decided to wander outside with my luggage and take some pictures.

Above are two photographs of the famous (or "infamous") Big Dig bridge. Boston Garden and North Station are to the left.

This bridge is a work of art (one that was decades in the making, from conception to completion), but what for? At a cost of $14.8 billion, the public officials who let this project move forward should have been required to take into consideration climate change (they knew about that back in the early 1990s, no one can say they did not) from increased vehicular traffic. And they should have been required to weigh the cost-benefits of simply connecting North Station to South Station versus the financial and environmental expenses of the Big Dig. Someone said to me this summer with a certain amount of hyperbole, "It would have cost an additional $30 billion to connect North Station to South Station."

Perhaps ... But I think the costs of connecting two transit hubs to each other will eventually pale in comparison to our delusions about endless cheap energy to fuel our current way of life.