Will Muni Be Thrown Under the Bus? 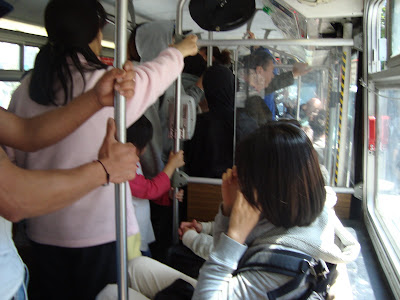 Muni riders on the 47 bus, one of the more infrequent buses that is usually at capacity when I board it.
Here's a quick update on everything that has gone down with the San Francisco Municipal Transportation Agency budget at the level of the San Francisco Board of Supervisors:

At the May 12 Board of Supervisors meeting, the supervisors, MTA staffers, and Mayor Gavin Newsom engaged in last minute negotiations to reduce some fare hikes to Muni. The supervisors ended up getting a giveback of $10.3 million out of a total budget that has been reported in the news as $784 million, $766 million, and $778.8 million with a deficit of $128.9 million ...

Item 8 was Supervisor David Chiu's original motion to reject the MTA budget. But because of the negotiations, Chiu, apparently satisfied with the givebacks, made a motion to table his previous motion -- and that second motion passed six to five.

I was sitting in the chamber taking notes when MTA Executive Director Nat Ford presented the details of the givebacks. At first I was sort of euphoric -- but then realized that there had been no analysis of the givebacks, and in the end, five members of the Board (Eric Mar, Ross Mirkarimi, Chris Daly, David Campos, and John Avalos) voted against the motion to table the motion to reject the budget.

And then the reporters, pundits, and one pissed-off commentator (me) got busy ...

Board decides not the reject Muni budget
SF Examiner

Board restores some Muni service, but Newsom gets his fare hike
San Francisco Bay Guardian

Within the next few days, Supervisor John Avalos got cracking, and working with Executive Director Nat Ford, Irwin Lum of Transport Workers United, Manish Champsee of Walk San Francisco, Leah Shahum of the San Francisco Bicycle Coalition, BART Board Director Tom Radulovich (also of Livable City), Pi Ra of Senior Action Network, and others, he came up with a much different budget that restores some bus service to low-income neighborhoods, lowers planned fare hikes for seniors, youth, and disabled riders, and expands the hours of operation of metered parking spots in some neighborhoods of the city. 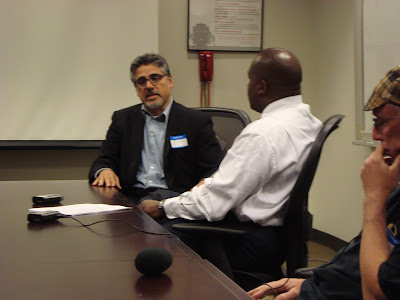 Supervisor John Avalos confers with MTA Executive Director Nat Ford on Monday, May 18.
At the next Board of Supervisors meeting, on May 19, supervisors voted seven to four (Ayes: Eric Mar, David Chiu, Ross Mirkarimi, Chris Daly, David Campos, Sophie Maxwell, and John Avalos; Noes: Michela Alioto-Pier, Carmen Chu, Sean Elsbernd, and Bevan Dufty) to continue the measure to a special Board of Supervisors meeting on Wednesday, May 27, at 12 noon.

We'll see what happens on May 27. Will any of the seven supervisors -- the number required by City Charter to reject the MTA budget -- fold, no doubt under pressure from the mayor, and throw Muni under the bus?