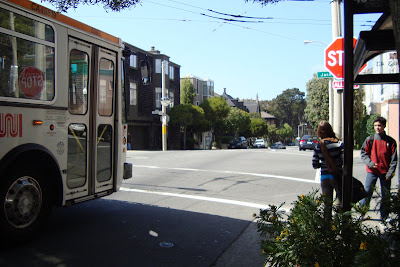 Students wait at a bus stop at the corner of Presidio and Jackson in San Francisco's Pacific Heights neighborhood.
Times are tough all over, and San Francisco's Municipal Transportation Agency is feeling the pinch, as are our Department of Public Health and other municipal departments. It's times like these that reveal the true color of politicians as they attempt to scramble up the public office ladder -- and Mayor Gavin Newsom, running for governor on a legacy as a "green transportation" mayor, has just failed a huge test.

After all, global climate change, natural resource wars, and the end of cheap energy are all coming to head right now, and internationally, nationally, and locally, this is a time when truly great leaders could be emerging and leading us all to new ways, instead of perpetuating old, unsustainable ways.

All Politics Is Local ...

San Franciscans have known for weeks that the SFMTA, which oversees our buses, light rail, taxis, and parking, was facing a deficit of $128.9 million, out of annual operating expenses somewhere in the neighborhood of $800 million plus. The solution? The SFMTA staff presented a budget to seven members of the SFMTA Board of Directors on April 30 that proposed raising fares and parking fees, and cutting Muni service and jobs.

But at the April 30 meeting, at one of the most opportune times to help shift people out of their cars and into buses and onto sidewalks and buses, directors -- all appointed by the mayor -- did not adopt the budget that staff had presented to them. Instead, Board Chairman Tom Nolan proposed amending the budget to eliminate staff proposals to start charging parking fees at metered parking spaces on Sundays and until 10 pm on weekdays -- and directors voted for the amended budget, six to one. (Even the SF Chamber of Commerce, normally about as car-friendly and eco-unfriendly as they come -- endorsed the proposal to charge for parking on Sundays and after hours on weeknights!) The directors are Tom Nolan, The Rev. Dr. James McCray, Jr., Cameron Beach, Shirley Breyer Black, Malcolm Heinicke, Jerry Lee, and Bruce Oka. McCray was the lone dissenting voice.

"We just lost a $9 million opportunity to restore service, and I'm not pleased," remarked Paul Hogarth of the Tenderloin Housing Clinic in public testimony about the amendment.

When I asked Nolan about the amendment and his vote after the meeting, he said, "In making rounds to some of the supervisors offices, it became clear that this was very important to them. Supervisor Carmen Chu in particular -- she didn't like the idea of enforcing parking out in the avenues in merchant areas next to residential neighborhoods." When asked, he said that the mayor's office was also in support of eliminating Sunday and after hours parking enforcement.

But clearly the mayor found a way to shift the onus of this amendment away from him and onto a couple of supervisors, one of whom will be named in subsequent publications of SF Streetsblog.

The budget -- which includes one-way fare increases from $1.50 to $2.00, monthly pass increases from $45 to $55 in July and then to $60 in January 2010, the elimination of about eight bus lines, the increase in head time between buses running on other lines, a 50 cent hourly across the board increase at all parking meters from 9 am to 6 pm, and increases in hourly and daily (but not monthy) rates at city-owned parking garages -- now goes to the San Francisco Board of Supervisors.

Board President David Chiu, however, has introduced a measure to reject the budget, and activists are out there organizing in support of his motion. His motion will be heard at the Budget and Finance Committee hearing on Wednesday, May 6. That hearing starts at 1:30 pm and will be held in Room 263 of San Francisco's City Hall and some of us are busily getting the word out that people need to turn out -- or at the very least send emails to supervisors -- in support of Chiu's motion:

We are, after all, a transit-first city -- and that's written into our city charter.

Quite interesting and informative. Thanks for sharing.