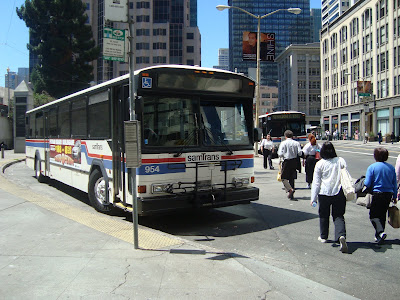 This piece recently appeared in the Prague-based publication, Carbusters. The editor there gave me permission to reprint it here.

As the most powerful person in the world, President Barack Hussein Obama has an unenviable task – saving humanity from its inclination to environmental self-destruction by transforming the way Americans travel. Obama’s Secretary of Transportation, Ray LaHood, does a good job of talking the talk about bicycling and walking as parts of this transformation. But have Obama and Congress started to walk the walk and really begun to change American transporation?

The American Recovery and Reinvestment Act

Obama signed into law the $787 billion stimulus bill early in his administration, $48.2 billion of which will go towards transportation. Most of that – $27.5 billion – is dedicated to highways and bridges. The rest gets distributed to various mass transit systems, with almost $10 billion for state and local public transportation – but only capital projects. To put this in context, San Francisco’s Municipal Transportation Agency alone has an annual operating budget of $700 million to $800 million, is expected to have operating expenses of $1 billion in five years, and was so strapped for funds this year that it cut bus service and raised fares.

(Here is a story on SamTrans, the public transportation system in San Mateo County, and the way that agency used its share of stimulus funds.)

Buried in the ARRA is the $1 billion Cash for Clunkers program in which car owners with vehicles that get 18 mpg or fewer can exchange their gas guzzlers for $4,500 towards the purchase of a new vehicle that gets at least 22 mpg. Some environmentalists, however, see this program as a handout to Detroit and auto dealerships, but not a serious way to tackle foreign oil dependence, global climate change, or any one of the other dire problems associated with car dependence.

(September 7, 2009: Congress increased the amount of stimulus money dedicated to Cash for Clunkers by $2 billion this past summer -- for a grand total of $3 billion. Many people saw this program as primarily a way to move merchandise, and one muckraker seriously criticized the program for adding to the nation's solid and toxic waste dilemmas.)

In mid-May, the Obama administration announced new automobile fuel economy standards calling for improvements of 5 percent a year – standards that will require that cars achieve 39 mpg and light trucks 30 mpg by 2016, 40 percent more efficient than cars are now. The new CAFÉ standards underscore the irrelevancy of the Cash for Clunkers program, but have their own weaknesses: sport utility vehicles, or SUVs, those humongous gas guzzlers long the favorites of families, have always been classified as ‘light trucks’. These new mandates also leave the American fleet at 2 mpg lower than the European fleet.

This bill, which passed the House of Representatives in June, addresses greenhouse gas emissions from mobile sources, but it overrides the United States Clean Air Act by permitting the construction of new coal-fired power plants for up to a decade with no additional emission reduction requirements.

And as to those mobile sources that are to be regulated? According to Auto Glass and Insurance Industry News, if the bill passes, the US Secretary of Energy would have to create a large-scale plug-in program and assist car manufacturers financially in their transition to producing electric vehicles.

The US Senate will take up review of this bill in September. The Center for Biological Diversity has come out in strong opposition to the bill. Here the Center for Public Integrity breaks down the dollar dance of industry and lawmakers now going on in Washington, DC over this bill.

The House of Representatives is now working on a half trillion-dollar reauthorization of the 2005 transportation act. Currently the bill seeks to set aside nearly $100 billion for public transit. However, in June the Obama administration announced its wish for an 18-month postponement. Jim Oberstar, D-Minnesota, chairman of the House transportation committee and an avid bicyclist, does not want to postpone the bill, but Jeff Mapes, staff writer for The Oregonian, and author of the just-published book, Pedaling Revolution: How Cyclists Are Changing American Cities, surmises that Congress will have to raise taxes in order to pay for this bill and that perhaps the Obama administration just is not ready for it.

“I do think Obama is interested in change,” says Mapes. “But it’s politically difficult to do … . One can argue that the 18-month delay will give his transportation department time to craft a plan.”

Obama appointed a ‘car czar’ to tackle the collapse of two of the Big Three car companies – GM and Chrysler. Under this czar, Steven Rattner, American taxpayers have become majority owners of General Motors and are likely to end up contributing $50 billion for its transformation into a leaner manufacturer of smaller, more fuel efficient cars with fewer dealerships. Meantime, Chrysler got $6.6 billion from the federal government to finance its exit from bankruptcy and its sale to Fiat. Many more billions in taxpayer dollars are likely to be funneled to suppliers and the GMAC, GM’s former finance arm. In addition, now that Americans are majority owners of GM, congressman and women are making efforts to keep dealerships in their own districts open. (Rattner has announced his resignation.)

GM and Chrysler “were both clearly failing enterprises and the bailouts were done just to … prevent massive numbers of unemployed [from hitting] the claims lines all at once,” says James Howard Kunstler, author of The Geography of Nowhere and other books about transportation. “I doubt that they will survive in any recognizable form … Personally, I think the whole Happy Motoring paradigm is in its death throes (though most Americans don't realize it),” he adds.

Does Obama realize it? That is hard to say. If he does, politically he may not be in a position to say so -- and he certainly has not been heard calling for gasoline taxes along the lines of what Europeans pay.

There was no room in the Carbusters edition for a section on ...

This topic deserves some deep research, but for now I'll say this: Obama seems to be bumping up the funding for passenger rail a wee bit, and he has ambitious plans for high-speed rail. Some critics say it's really more important to just fix up the system we now have -- improve and expand the tracks (and perhaps get Amtrak onto separate tracks too so that it is not constantly playing second fiddle to freight trains up at the pass just west of Denver ...). And if you look at the maps for projected high-speed rail lines, there are strange disconnects all over the nation -- HSR from San Antonio to Austin and Dallas-Fort Worth with no connections to Houston; HSR all around Chicago and through the Midwest, with no connections to New York or Washington, DC. There could be some logic to this, but it's beyond me.

I recently came accross your blog and have been reading along. I thought I would leave my first comment. I dont know what to say except that I have enjoyed reading. Nice blog. I will keep visiting this blog very often.

Thanks so much, Oliver. When I get feedback like this, I am encouraged to update it more often.