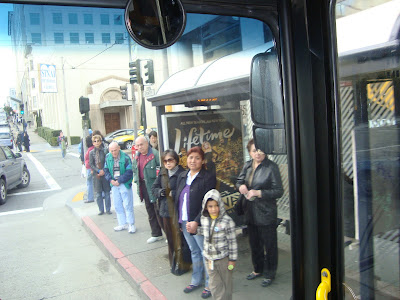 Passengers wait to board the 38 Limited bus on Geary at Divisadero. On February 26, 2010, the San Francisco Municipal Transportation Agency Board of Directors voted 4 to 3 to cut service by 10 percent in order to close a budget gap.

This is a the third in a series about the San Francisco Municipal Transportation Agency's financial woes. The first two are posted on Fog City Journal, which has been hacked. We'll get all parts of the series together when FCJ is back up and running, but for the time being, I will be posting Muni updates here.

The San Francisco Municipal Transportation Agency (SFMTA) – the agency that manages San Francisco’s parking, traffic, and public transportation – has a problem. Simply put, it doesn’t have enough money. In order to balance its budget, it is cutting service, raising fees, fines, and fares, and begging …

The SFMTA – an agency that required $800 million plus annually up until last year – has been suffering budget deficits on and off since 2005. Last year’s deficit reached an initial $128.9 million in February and March. The amount grew by an additional $45 million last fall, but the agency has been able to whittle that second deficit down to $12.1 million, in part because the Federal Transit Administration (FTA) denied the Oakland Airport Connector project $70 million. Seventeen million of federal money that had been allocated to the construction of a connection between BART and the Oakland Airport is now dedicated to non-operational projects at the SFMTA.

The agency also got some good news on late Monday, March 22. Governor Arnold Schwarzenegger, having recently lost a case in which he was sued for raiding the State Transit Assistance (STA) funds three years in a row, signed the gas tax swap. This deal eliminates the gasoline tax – which had been the source of the STA – but raises the excise tax on diesel. His signature on the two measures creating the swap – ABX8 6 and ABX8 9 – will bring in some $400 million to cash-strapped state coffers and some $36 million to the SFMTA on June 22.

However, deficits still loom. As of a few weeks ago, the FY 2011 deficit had been pegged at $56.4 million and the FY 2012 deficit at $45.3 million. Additional sources of money depend on the political willingness of city leaders to put revenue-raising measures on the ballot and on the voters to vote for them. Stemming the bleeding may also involve a reexamination of existing SFMTA capital projects.

The general public should have the following dates on their agendas. I’m putting them in chronological order, but some of the meetings may have more import than others:

This meeting will be in part a public hearing in which staff will propose possible “increases to various fares, fees, fines, rates and charges, transit service modifications and expenditure reductions” (Item 11 on the agenda) in order to close the FY 2011-2012 budget gap.

The Board of Directors – all appointed by the mayor – will also vote on whether or not to declare a fiscal emergency for FY 2011, as they did in April 2009 for FY 2010. If they vote to declare a fiscal emergency (last year’s vote was 4 to 3 in favor) – and Bill Wycko at the San Francisco Planning Department issues a “Certificate of Determination” that exempts the agency from a conducting California Environmental Quality Act environmental impact report on proposed fee, fine, and fare increases, and service cuts and changes – the agency may be able to implement even more service cuts in the upcoming year. This is Item 12 on their agenda. 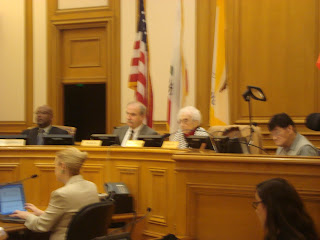 Item 14 relates to the creation of a Taxi Advisory Council. For a long time, various political leaders have been trying to turn medallions – which are issued virtually free of charge to cab drivers who put their names on waiting lists and then wait for years – into cash cows. A pilot program with a small number of medallions is under way. To oversee the industry the SFMTA is considering the creation of a Taxi Advisory Council (the Taxicab Commission was abolished by the passage of Proposition A in 2007.)

This group of 11 people is the supervisors with different hats on. As Transportation Authority commissioners, they oversee the SFCTA and the 2003 Proposition K half-cent sales tax revenue. According to the legal text of Proposition K, the revenue it generates is supposed to go to maintenance of local streets, transportation for the elderly and disabled, construction of the Central Subway, capital upgrades to the bus system, the Caltrain extension to the new Transbay Terminal, projects to improve pedestrian and bicycle safety, support for regional transportation systems, and the replacement of Doyle Drive.

On Tuesday, the commissioners will consider allocating $100,000 of Proposition K funds to conduct a management performance audit of Muni to be conducted by the Budget Analyst’s Office.

“There hasn’t been a management audit for 14 years,” notes District 9 Supervisor David Campos. “According to board policy, it’s supposed to be done every eight years.” Campos chairs the Plans and Programs Committee of the Transportation Authority.

The commissioners will also be considering the adoption a baseline budget of about $9 million, a schedule, and a funding plan for the Central Subway Project. This project, the $1.6 billion Phase II of the $2.2 billion project that includes the T-Third Street Light Rail, is hugely controversial. Over $942 million of the funds to build the Central Subway will come from the federal government. The rest will come from state and local sources – but at least $164.1 million of the funds necessary to build the project have not been identified.

Federal Transit Administration Region IX Director Leslie Rodgers wrote a letter to SFMTA Executive Director Nat Ford on January 7 giving the agency the go-ahead to enter the final design stage of the project. But Rodgers made it clear that the SFMTA does not have a green light to break ground on a tunnel for the subway. His letter ends:

In summary, SFMTA must take steps to demonstrate adequate financial capacity to construct the project as well as maintain current system operations; a state of good repair of existing vehicles and infrastructure; and the project management ability and technical capacity to successfully design and construct the Central Subway project before FTA will consider the project for [a Full Funding Grant Agreement].

“Local officials are gambling with taxpayer dollars to finance the Central Subway construction project while Muni teeters on a multiyear death spiral of budget deficits,” wrote Howard Wong of SaveMuni.com in a March 22 letter to members of the Municipal Transportation Agency Citizens Advisory Council.

“I … think that the [FTA] letter raises a lot of red flags,” said Campos, sitting as a commissioner, at a March 23 meeting of the Plans and Programs Committee. “Can the SFCTA demonstrate the Central Subway will not deplete [SFMTA funds]?”

But: “There’s no reason to believe that the MTA won’t be able to meet the challenges [set forth in the Rodgers’ letter],” responded TA Executive Director Jose Luis Moscovich.

Item 39 is a motion, sponsored by Supervisors David Chiu, David Campos, Bevan Dufty, and Ross Mirkarimi to reject the SFTMA’s creation of $70 premium express and cable car passes, passes that were to go into effect on May 1 and bring in an additional $900,000 over the course of three months.

“Tiers are likely to cause confusion with riders,” said Supervisor Ross Mirkarimi when he introduced the motion at the regularly scheduled Board of Supervisors meeting on March 23. “With Governor Schwarzenegger signing [ABX8 6 and ABX8 9] Muni is likely to receive additional funding. It’s time to consider whether the fares are just and proportionate.”

“A number of us had been thinking about introducing a reject motion … on raising fares on Muni riders that we need to keep as part of our system,” added Board of Supervisors President David Chiu. (At the March 23 Board of Supervisors meeting, Chiu also introduced a motion for the SFMTA to come before the Board of Supervisors and explain how it plans to use the $36 million in funds from the state.)

At this meeting, the supervisors – acting in their capacity as commissioners of the TA – will consider the SFMTA’s request for $7 million from Proposition K funds to help bale out the agency.

But is that legal?

Campos, in his capacity as commissioner, has requested a legal opinion from TA Executive Director Moscovich on the question of legality – can the commissioners allocate $7 million in funds from the sales tax to the SFMTA?

If it turns out that the agency can shift money to the SFMTA, activists are encouraging the commissioners to make demands on how that money is spent. Executive Director of Livable City Tom Radulovich (and a BART Board Director) has suggested – if indeed it is found that the TA can allocate $7 million to the SFMTA – that the TA offer that money in the form of matching funds: the TA agrees to allocate the money to the SFMTA if it can come up with a matching amount through savings or, for example, through the expansion of the hours of parking meter operation.

Tuesday, April 6, the SFMTA Board of Directors, Rm 400 of City Hall, tentatively planned to start at 2 p.m.

The agenda has not yet been set for this meeting, but we know that the Board of Directors will again be considering the FY 2011-2012 budget.

A local resident and frequent Muni rider has filed an appeal of the 10 percent service cuts based on the fact that they were not under consideration in April 2009 when the Board of Directors voted to declare a fiscal emergency and seek a waiver of CEQA. The Board of Supervisors will consider that appeal on April 13 at its regularly scheduled board meeting. Members of the public can get a copy of the appeal at the office of the clerk of the Board of Supervisors.

This is a great explanation of what is happening with the SFMTA, the Board of Supervisors, and upcoming meetings. I hope you will recap what sounds like humdingers of meetings yesterday...

I'll try. I had to run out right after I testified to go to work, so I missed the vote. But I do know this: they voted to declare another fiscal emergency, 5 to 2 in favor.

I need to watch the reruns of the meeting to do an update, but until then there's a good SF Streetsbog story about the meeting.

very good information and look forward for more, thanks.