The Citizens of This Nation Who Have Been Subjected to Warrantless Wiretapping v. Obama and Bush 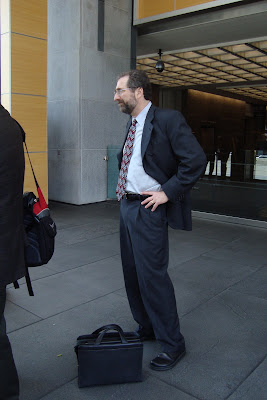 Jon Eisenberg, counsel for the plaintiffs in Al-Haramain v. Bush/Obama.
Criminy, what a title.

We thought things would get better under Barack Obama, but at least I'll give him credit for these two things: 1) the Bush administration left him a legal can of worms; and 2) he tries. George W. Bush never had to try. When you are a white male scion of privilege, that's your lucky break. You think you are entitled, so your bristle when challenged (to try).

Barack Obama, though male, has hardly reached the level of entitlement expressed by George W. Bush and his ilk.

Last a week a colleague and I spent hours sitting in on warrantless wiretapping hearings in federal court in San Francisco. We are learning on the fly. I had virtually no idea what was going on. Except for this: attorneys from the American Civil Liberties Union and the Electronic Frontier Foundation, and some independent lawyers, were out fighting the good fight in defense of the Bill of Rights, and in particular the Fourth Amendment. Go Defenders of the Bill of Rights!

These were the cases they were considering:

That was June 3, 2009. I had taken the elevator up to the 17th Floor of the old Federal Building in San Francisco, gotten there early, slipped into the courtroom, sat up front, and ...

Behind me were some people talk about Hepting ...

Ok, that's the multi-district litigation (or MDL), more commonly thought of as a class action, suit brought by ordinary citizens who had reason to believe that the telecommunications companies that they had subscribed to (you know, like Verizon, BELLSouth, or AT&T) had turned over their subscriber records to the National Security Agency -- for the purpose of spying.

The case is Hepting v. AT&T. Or some other telecommunication company. The plaintiffs filed their suits -- which were later combined into the MDL -- in like 2006 or 2007, sometime after the New York Times broke its story about NSA warrantless wiretapping in late 2005 after sitting on it for more than a year. (Had the NYT run its story in 2004, it could have impacted the outcome of the 2004 election; for obvious reasons, the Bush administration played the national security card hard before the election -- and succeeded in getting the Times to hold the story.)

The folks behind me were lawyers, and in fact, the judge in this case (in ALL these cases), Judge Vaughn R. Walker, was not only hearing the McMurray and the Al-Haramain case that day, but he had issued his Hepting ruling that morning ...

I would have liked to have told you that Judge Walker had ruled against the telecomms but Congress (and then President Bush) had thrown a little roadblock in the way: the Foreign Intelligence Surveillance Act Amendments Act (otherwise known as FISAAA). Congress did that last summer when Democrats had control of both Houses of Congress -- but just barely -- and they were desperate to be rid of the Republican nutcases whom they had capitulated to on so many occasions since September 11, 2001. Congress passed the FISAAA -- and George W. Bush signed it -- in July 2008. (Oh, by the way, after much protest against the FISAAA, Obama voted FOR it, though Joe Biden voted against it ...)

Among the provisions of FISAAA? In fact probably the most important provision? An immunity clause that stopped the Hepting case against AT&T and other telecommunications companies in its tracks.

Walker reviewed the research done by plaintiffs' and defendants' lawyers all the way back to the years just after the Civil War and agreed with the defendants that, indeed, Congress is within its powers to pass a law that determines the outcome of a pending case.

One of the lawyers gave me a copy of Walker's ruling. And then when I went home and looked at my computer, some days later, I realized I had also downloaded a copy of another ruling of his -- issued simultaneously -- in which he ordered state governments from Maine to ??? to stop their investigations of said telecomms ...

But he did leave American citizens with some good things:

1) In the McMurray case, plaintiffs are suing on the basis of a taking: that is, in passing FISAAA, Congress obstracted Fifth Amendment rights to due process, in this case substantive due process in the form of hearing out a lawsuit that had already been in process. For the time being, Walker has allowed that case to survive;

2) Realizing that the Hepting case had some legal hurdles, some of the plaintiffs broke off and filed charges under Jewel v. the NSA, directly challenging a government agency in its complicity in warrantless wiretapping. In his Hepting ruling, Walker specifically mentions Jewel and suggests it should be allowed to proceed in its case against a government agency; and,

3) In Al-Haramain, Judge Walker and the lawyers for either side have agreed that the next date to appear in front of him will be September 1. Then, plaintiffs' lawyer Jon Eisenberg can argue why the case has standing, and Anthony Coppolino of the US Department of Justice and Tim Stinson of the National Security Agency (who just sits there, kinda spy-like) can argue that there is NO standing and can we get this thing into the darn 9th US Circuit Court of Appeals like now? (NO says Walker and argues Eisenberg!!!! Not until there is a final ruling -- from Walker's court.)

[Update: the Al-Haramain hearing was postponed until September 23.]

Ok, did I get that right?