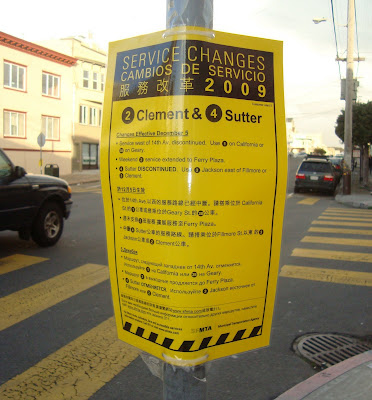 At my right on my desk is a copy of 14-page appeal of the San Francisco Municipal Transportation Agency’s decision to cut service on Muni buses and light rail starting on Saturday, December 5, due to a fiscal emergency, which the agency declared last spring. I knew that this appeal was in the works, and so starting writing up a story, but the appeal did not get handed to me until last night when I was in a meeting. Also, I'd been trying for weeks and weeks to extract from the SFMTA the exact approximate amount that the agency expected to save based on the changes. On November 3, it was reproted to the SFMTA Board of Directors that the amount would be $13.4 million. But on Tuesday, a staffer told me that the figure was $3.2 million. "That's nothing," I said. Here’s my write up so far …

A Muni rider has appealed the changes to the San Francisco Board of Supervisors based on his belief that the San Francisco Municipal Transportation Agency’s waiver of the California Environmental Quality Review Act (CEQA) in the spring was illegal. He hopes that significant Muni service changes planned for December 5 – including the elimination of some bus lines, reductions in service on others, and enhanced service on the 38L and the 14L – could be postponed indefinitely at the very least and halted at best.

Responding to a fiscal shortfall of $128.9 million for fiscal year 2009-2010, the seven members of the SFTMA Board of Directors voted four to three on April 21 to declare a fiscal emergency in order to waive CEQA reviews and launch immediately into service reductions, service changes, fare increases, and increases in the costs to park at meters.

However, Muni rider David Pilpel is arguing that the Board of Directors of the SFMTA is not legally permitted to waive CEQA and implement changes without doing an environmental review, at least not according to Public Resources Code 21080.32. This section of the state code permits publicly owned transit agencies to waive environmental reviews of service changes when faced with budget shortfalls if the agency determines that the planned service changes are unavoidable.

“The MTA is not a publicly-owned transit agency within the meaning of the law. It’s a city department, a multi-modal transportation agency with a broader array of policy choices to address a revenue shortfall than just a single-purpose transit agency, particularly one with no taxing power,” says Pilpel.

"If all you can do is raise fares and cut service, then it makes sense to have an exemption. CEQA should be narrowly construed for that kind of emergency," Pilpel says. He suggests that there are other things that SFMTA could be doing to balance the agency budget – it could be looking at labor costs and renegotiating bargaining agreements, cutting staff, changing the way work gets done, and prioritizing work.

And considering the fact that the service reductions and changes that were to go into effect on December 5 amounted to a savings of, according to a staff presentation at the November 3 Board of Directors meeting, $13.4 million (this figure has since been revised downward to $3.2 million), many transit advocates think that the Board of Directors should have agreed to expand the hours of parking meter operation, a proposal that staff said would bring in an additional $9 million annually. Staff first proposed expanding the hours in the spring, but some members of the Board of Supervisors and the mayor opposed the plans, which were sure to be politically unpopular. At a special meeting of the SFMTA Board of Directors on April 30, called to amend the two-year budget that had been adopted the previous spring, Director Tom Nolan introduced an amendment to staff’s proposed budget,which had included expanded metering hours. Nolan’s amendment to excise the expanded metering hours proposal was adopted six to one as a part of the entire amended budget.

When it came time for the Board of Supervisors to approve that amended budget – with fare increases and service reductions and changes – there were only five votes to reject the budget (seven are necessary according to the City Charter): District 1 Supervisor Eric Mar, District 5 Supervisor Ross Mirkarimi, District 6 supervisor Chris Daly, District 9 Supervisor David Campos, and District 11 Supervisor John Avalos. Board President David Chiu was able to negotiate givebacks that included enhancement of service on some lines and a promise to renegotiate MOUs with the police department, totaling about $10.5 million. The SFMTA also agreed to conduct a 90-day study on metered parking enforcement.

Following the Board of Directors and Board of San Francisco votes, on July first, one-time bus and light rail fares were raised from $1.50 to $2.00, adult monthly passes went up from $45 to $55, and passes for seniors, youth and disabled riders went up to $15. The fares for passes will rise again in January to $60 – or $70 for riders who want to use their passes for travel on BART within the city.

Staff also set about creating plans to reduce service. Those plans – including the elimination of the 26 Valencia, the 7 Haight, and 4 Sutter, reductions in service on the 31 Balboa and other lines, and eliminations on segments such as the part of the N-Judah that goes to the ballpark (this will only be eliminated on weekends), the 38 Ocean Beach beyond 33rd Avenue, and the 2 Clement beyond Park Presidio. In recent weeks layoff notices have also been sent to 58 SFMTA employees, including 21 parking control officers (PCOs) and some of their supervisors.

“PCOs generate $200,000 more than they cost to employ,” says Robert Haaland of the Service Employees International Union Local 1021 which represents the PCOs. “Under [SFMTA Executive Director] Nat Ford there’s been an exponential management growth. … The current round of layoffs is almost exclusively 1021. There’s a systematic breakdown in City government because people who do the actual work are either getting laid off or bumped.”

Note: Haaland’s assertion is disputed by staff at the SFMTA. SFMTA staff note that about 50 additional PCOs have been hired in recent years, but that due to the recession and reduction in street cleaning, these PCOs are not paying for themselves.

In recent weeks SFMTA staff have also released the results of the 90-day parking study and recommended that the Board of Directors adopt its findings and implement metering hours in particular neighborhoods – such as along Geary Boulevard, Clement Street, the Inner Sunset, Mission and Valencia streets, and in large swaths of Polk Gulch, the Tenderloin, and South of Market. The study predicts that if metering hours are expanded parking availability will increase, and congestion and double parking will decrease. Annual revenues are expected to be $8.83 million, with one-time implementation costs of $2.5 million.

It is not clear what impact Pilpel’s appeal will have on the agency’s plans to role out service changes starting on Saturday, December 5, as members of the San Francisco Board of Supervisors will not have time to consider the matter until its next regularly scheduled board meeting on Tuesday, December 10.

Pilpel rests his legal right to appeal on Section 21151c of the state Public Resources Code.

Thank you for the write up. I was waiting for something to pop up on Streetsblog or the Chron (laugh).

Do I need to write David Chiu? Or will the BOS not have a say until after the MTA directors get their hands on it?

They have said nothing on the news about the MUNI changes being postponed. they all say it goes into effect tomorrow.

David Pilpel has been working on this appeal for some weeks now. He handed me a copy yesterday evening after he had filed the appeal with the clerk of the San Francisco Board of Supervisors. SF Streetsblog and the SF Chronicle have both known that the appeal has been in the works. There may be an issue of timeliness -- but Pilpel was waiting to get certain information from the SFMTA in order to complete his appeal.

Not necessarily relevant to the legal ins and outs of his maneuver, but certainly relevant to those of us who depend on Muni or who are transit advocates as a part of our environmental sentiments, is the fact that the SFMTA only projects savings of $3.2 million as a result of the service changes. Had the seven member Board of Directors chosen instead to expand the hours of parking meter operation, upwards of $9 million would have been generated, negating the need for service reductions. And believe me, the service reductions are going to be felt -- I just spent several hours riding the 38 Geary between 33rd Avenue and La Playa, the segment of the route that is to be eliminated starting tomorrow, and making sure that riders were informed of the changes. While admittedly, none of the buses I took were at capacity (not to be expected at the end of any routes), the vast majority of riders were elderly and non-English speaking. It is going to be difficult for many of these riders to negotiate the transfers between buses that will now be necessitated (even when some alternative buses stop a mere three blocks further away from where the 38 would have taken them) and the longer times it will take for them to get to and from their destinations.

In the era of what Amy Goodman calls global warming and global warring (over the crumbs of fossil fuels and other natural resources), the seven-member SFMTA Board of Directors, backed up by the mayor and a majority of the members of the Board of Supervisors, are certainly taking San Francisco in the wrong direction.

Enjoyed meeting you at the 9th circuit. Sincerely, Chris