Make Me Do It 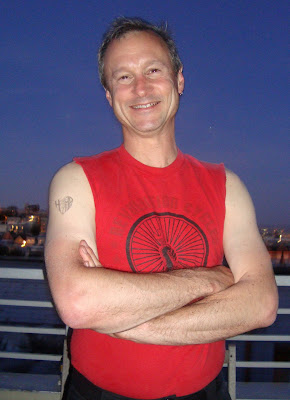 The past week and a half, San Francisco's progressive political junkies, a group of fiercely intense -- or intensely fierce -- addicts of the drama that unfolds in San Francisco's City Hall were justly rewarded for their addiction.

Dave Snyder is a well-known bicycle advocate and transportation wiz. He did not found the San Francisco Bicycle Coalition, but in the 1990s he started to revive it and, as executive director, eventually turned it into a 2,000 member political advocacy group. It now numbers 10,000, about same membership as the local Sierra Club. Snyder left the SFBC to found Transportation for a Livable City (now Livable City), and then got a job as Transportation Policy Director at the San Francisco Planning and Urban Research Association (SPUR).

All the while, he has never owned a car in his life ...

In February or March, at the suggestion of some anonymous person, he nominated himself for an opening on the GGBHTD, a regional commission with 19 members from six California counties. San Francisco has nine commissioners: the mayor gets to appoint one; the 11 members of our Board of Supervisors get to appoint four; and four of San Francisco's commissioners are actually supervisors as well. Commissioners vote on tolls and other matters relating to the operation, maintenance, and funding of the bridge and some roads and transit systems connected to it.

Candidates wishing to represent San Francisco must apply through the Rules Committee of the San Francisco Board of Supervisors. That's what Snyder did. But the seat Snyder was applying for has traditionally been a "labor" seat, and there was another candidate, Larry Mazzola, of the United Association of Journeymen and Apprentices of the Plumbing and Pipefitting Industry Local 38, who also applied. Mazzola was considered in no way qualified for the position compared to Snyder by many observers, but when Snyder realized his seat was traditionally held by someone in labor, he agreed to withdraw his nomination -- if a qualified candidate from labor could be found.

Some weeks went by. Or some days. I can't remember.

Then one Friday, Supervisor Chris Daly, chair of the SF Board of Supervisors Rules Committee, called up Snyder and said, hey, you know what Mazzola's allies are doing? They (four conservative members of the board who are allies of the mayor) are pulling some parliamentary maneuver and forwarding his name on to the full board of supervisors as the only candidate for the commission.

Daly is kind of the bad boy of the Board, passionate and principled, though sometimes stretching the definition of "principled". Labor in SF can be a bit of a racket, a reliable pro-development lobby for the moneyed interests that would tear down as much of our rent-controlled buildings as possible and replace them with market-rate and luxury condominiums if they could. Mazzola worked hard to defeat Daly when he was up for reelection in 2006 -- but Daly squeaked to a win anyway.

Anyway, at this point, Hope Johnson and Luke Thomas, of Fog City Journal and Stay Tuned SF, got to work ... 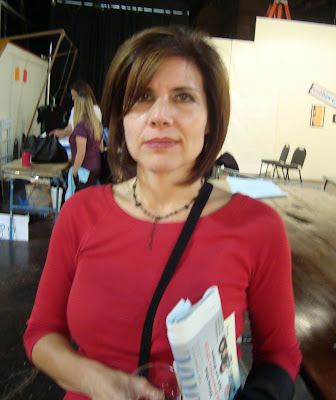 Hope Johnson of Stayed Tuned SF
And perhaps in part because of the coverage that these two intrepid and fired up freelancers gave the matter, six members of the Board of Supervisors, four of them newly-elected as part of a "progressive bloc" in November 2008, thwarted the four more conservative members and voted to appoint Snyder:

But now Labor is having a hissy fit:

I'm all for unions and jobs, but union workers don't get to have just any old construction project because it will bring jobs. The environment (and historic preservation) has to be taken into consideration.

I ran into Snyder recently and we got to talking about the kerfuffle. I posed this question to him: if you were willing to withdraw your name from consideration in favor of a qualified Labor candidate, then why didn't Labor put forth a qualified candidate? He didn't know the answer.

Behind the Democratic Party Lunch Picket
(Pay special attention to the remarks of marcos ...)

Make Him Do It

When Snyder and I were talking, I brought up the issue of tolls. Tying direct costs to driving is a big item on the wish lists of environmentalists and transit advocates like myself. I told him I wanted him to work to raise tolls on the Golden Gate Bridge.

His response? His words were the words of Franklin Delano Roosevelt: "Make me do it." In other words, write a letter and more than that, organize a movement to demand that the cost of driving be directly tied to the act of driving.

I'm game, and have high hopes for Snyder's tenure on the commission. (They're going to have to raise tolls, especially to pay for that $75 million that bridge district has agreed to donate to the rebuild of the viaduct that connects the bridge -- and all of northern California -- to the rest of San Francisco).

Make BHO Do It

But here's what I'm more worried about: BHO, you know, Barack Hussein Obama. He, too, is repeating the refrain of Franklin Delano Roosevelt: I agree with you, but make me do it. In recent days, BHO has released torture memos from the Bush administration and on Tuesday, April 21 the New York Times even reported that he had begun to talk about the possibility of prosecuting the lawyers who reinterpreted the law so as to give cover to the practice of torture in order to extract information from detained terror suspects.

But then on April 23 the NYT announced he opposes the creation of a commission to do a broad investigation into the Bush administration.

And what about those terror suspects who have been subjected to extraordinary rendition, detained without charges, and tortured? His Department of Justice lawyers are continuing to argue that their cases cannot be litigated because of state secrets, and now they are even using that argument to prevent cases going forward against AT&T and other telecommunications companies for warrantless wiretapping.

I guess we're going to have to make him change his position on those matters.

There are plenty of things we are not going to be able to make Barack Obama do by petitioning Barack Obama to do this or that. They can only be done locally, with the long haul in mind, and, with "pessimism of the intellect, optimism of the will."

I tried to explain this, with regard to the covert U.S. war in D.R. Congo,
http://www.sfbayview.com/2009/the-african-holocaust-in-dr-congo-war-for-the-sake-of-war-itself/ .