Changes in the Land 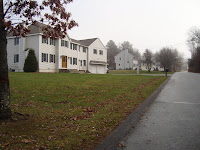 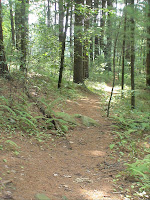 My grandparents left Texas in 1950 and bought a farm in New England where both of them had centuries old roots. We know that the farmhouse and barn, built in a marshy wetland, were started before the American Revolution and completed afterwards.

My grandfather died in 1978. At that time, other farm families that had been in the area for generations could no longer farm profitably or chose to sell out and make what money they could by selling to developers. My grandmother, however, a biologist by training and naturalist by practice, decided to take advantage of state law and turn her land into a conservation trust. She did this in cooperation with other local farmers, and by the time she passed away in 1997, she had put the land into a conservation easement that would exist in perpetuity.

According to the peak oil documentary, The End of Suburbia, subdivisions such as the one on the left are going to be the slums of the future as they are energy intensive and unsustainable. However, my uncle, a retired biologist who now works the farm with one of my mother's sisters, is the first to admit that the farm, as it is currently run, is not sustainable either.